The Charbonneau Group pursues frontier research in soft matter using simulation and theory. We tackle questions ranging from the molecular to the colloidal scale, such as the glass problem, protein crystallization, and nano- and microscale particle assembly. 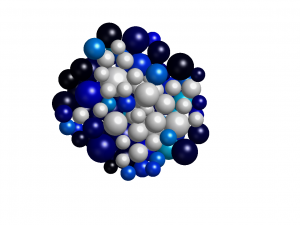 Explaining how a liquid turns into solid glass is one of the most challenging problems in the theory of matter. By changing the dimension of space in simulations, my group first showed that the liquid structure is important in preventing crystallization, but that simple geometrical frustration does not cause the dynamical slowdown.

In order to further elucidate how rugged free-energy landscapes relate to glassiness, we helped set up the Simons Collaboration on Cracking the Glass Problem: https://scglass.uchicago.edu. As part of this effort, we specifically use numerical simulations, mean-field theory, and renormalization group approaches to understand glassiness.

Through numerical simulations, we have shown that the amorphous order is intimately related to the rarefaction of metastable states in the landscape, and is universally responsible for rapid dynamical slowdown observed in glass-forming liquids. Through mean-field theory, we have discovered a critical transition upon cooling/compressing glasses. Through simulations and renormalization group studies, we have further revealed that this phenomenon persists even in the presence of violent fluctuations.

We are currently trying to understand the remarkable universality and dimensional robustness of the jamming transition in deeply quenched glasses, and the various relaxation processes involved in glass formation. 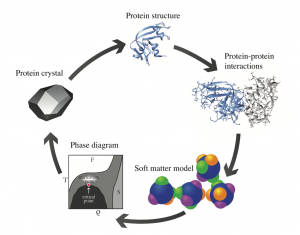 The resulting rationalization of the crystallization behavior of certain proteins allows us to make verifiable predictions about optimal crystallization conditions, and to constructively revisit physical and biological descriptions of the process. In collaboration with various protein crystallization facilities, we are also developing tools to analyze and interpret the results of crystallization experiments, and thus guide the formulation of appropriate experimental conditions. 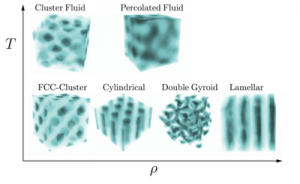 The self-assembly of nanoscale components is one of the most promising routes for designing ever smaller and more complex devices, such as organic photovoltaics and memory circuits. Microphase formers exhibit an exotic array of structures on the nanoscale, and these systems’ relative simplicity makes them plausible experimental targets. Yet standard thermodynamic and kinetic descriptions provide insufficient guidance.

Our novel simulation methodology for correctly treating lattices with fluctuating site occupancy allows us to obtain the equilibrium phase behavior of arbitrary microphase formers. Even the most basic of these models exhibit a surprisingly rich and novel behavior, such as softening due to clustering, reentrant transitions, and the formation of structure as varied as cluster crystals and double gyroid assemblies.

Reliably tailored mesoscale structures have potential applications that range from photonic crystals to biological templates. Interestingly, tuning colloidal interactions through external fields can give rise in a wealth of different structures in that size scale. Understanding and controlling their assembly, however, remains challenging. In collaboration with various experimental groups we study the assembly of nano- and microscale colloidal suspensions in magnetic, gravitational and acoustic fields.

The History of Replica Symmetry Breaking in Physics

From 1975 to 1995, the statistical physics community underwent a paradigm shift, as replica symmetry breaking was first properly formulated, and then gradually developed by the physics and mathematical communities. Recent advances in the physics of glasses, inference, and machine learning, among others, take their root in this major yet somewhat obscure theoretical development.

For posterity and future study, we are conducting a series of interviews with the original scientific participants and deposit them at the Centre d’Archives de Philosophie, d’Histoire et d’Édition des Sciences (CAPHÉS) of École normale supérieure de Paris (ENS).